It feels like you are in the middle of a huge crisis. Your world has turned upside down. What can you do?

With an unintended pregnancy, whatever you decide to do will be life changing. So, what do you do?

Talk to someone who can answer your questions and provide support while you navigate this crisis.

What’s going on in there?

You probably have lots of questions about what’s going on inside your body. Pregnancy is a time of enormous growth for your baby and some pretty earth-shaking changes for you, as well.  Let’s start by looking at how medical professionals describe pregnancy.

The experts divide pregnancy into 3 trimesters, each lasting about 3 months.  In the first trimester, you’re likely to notice lots of early pregnancy symptoms, like nausea, frequent urination, fatigue, and the obvious: no menstrual period.  Believe it or not, this time period sees the most active development for your baby as it grows from fertilization and implantation in the uterus through development of all major organs and structures, right down to tiny fingerprints and toothbuds!

The second trimester sees the easing of early pregnancy symptoms, such as nausea and frequent urination, in most women.  You should start to feel your baby’s movements during this period.  In the beginning, they feel like fluttery butterfly wings beating against your tummy.  Later on, you’ll be able to see as well as feel your baby’s kicks!  Your baby adds weight and length during the middle trimester as all that early development matures into the ability to sense light, movement, and sounds. 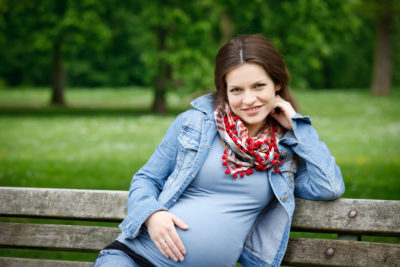 Your belly expands during the third trimester as your baby plumps up and prepares for birth.  You’ll notice more pregnancy discomforts during this period, including the return of frequent urination and fatigue. All your baby’s organs are putting on a last push for life outside the womb, and space is growing tight.